I may receive a commission if you purchase through links in this post. - Danielle
40shares 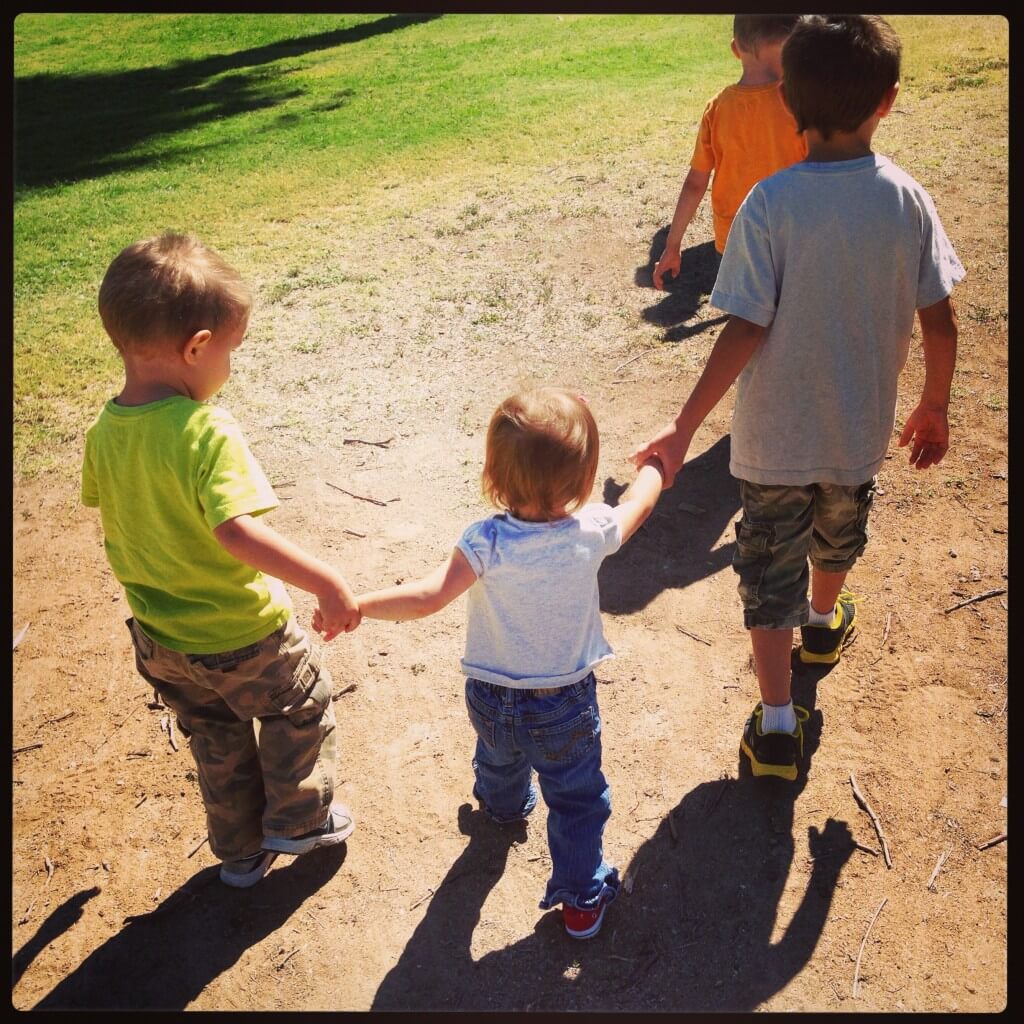 Can’t we all just get along? 🙂

I’m trying to prepare my heart to write this, even as I write this. In fact, I’m sure I am not ready to write this. How many revisions will this take? Should it take a hundred, or should I just speak from my heart?

Well, I couldn’t even get past the first paragraph without stopping. It’s been several hours and I feel more at peace, more like writing something of a sensitive nature. I’m really not sure how to do this, but. . . I have something on my heart + I have a blog, so here it lands.

I’ve been thinking about us Christians. I think a lot about us most days; I’m a Christian so I guess that’s probably on par. But here’s what I think about often: the way we treat other Christians. (Note: I just confirmed I am a Christian, so I am including myself in this category!) Do you ever just sit back and try to take it all in?

An event took place this week which gave me pause.

Someone wrote an absolutely scathing (and I feel, journalistically unethical) column a few months ago about Pastor Joel Osteen, and this week it circulated around social media – more specifically, my Facebook feed.

(Did I mention I had already woken up in a terrible mood?)

Here’s a suggestion: don’t open up your Facebook feed when you’re in a foul mood. (Don’t worry, I’m not in a foul mood anymore. 😉 )

Anywho, upon reading this article seemingly about Joel Osteen’s theology, I came across several claims about the pastor, and his thoughts concerning some certain sins that pastors in the spotlight can’t seem to stop being questioned about.

I wanted to find out more. So I read this column, which was written about a year ago. I got some pretty definitive answers in regards to how Pastor Osteen felt about the topic. Even though I personally sensed a bias coming from the journalist, I felt this article was written at a level much higher than the original article. I got a good sense for where the pastor stands. Okay.

Then I read this article, written a few weeks ago. Now I’m getting a better understanding.

So let me break for a minute. Stop and think. Can you imagine what it must be like to be a Christian under a magnifying glass filled with one billion eyes, more or less? I bet you’d see the journalists coming miles away, getting ready to write that article they are counting on going viral. Getting ready to chop up your words and let either side finish you off. I can sense it just reading the article.

Here’s where I just want to point out that, as I see it, I feel like Joel Osteen simply wants to talk about his new book and hopefully have a chance to uplift people. It’s a courtesy given to thousands of interviewees a day, but the second a widely-known pastor walks in, here come the combative questions and the traps. . . whoa, it’s a mine field out there!

Now, back to the original post, the one I had questions about. Here are the title and opening lines:

According to Joel Osteen – Pastor of Lakewood Church in Houston, Texas, these first century apostles are wrong and outdated and he has come out boldly to infer indirectly that Apostles Paul, Peter, and John whom wrote much of the New Testament were wrong and need to be corrected and rebuked.

When asked directly if people whom are openly practicing homosexuals are accepted into the Kingdom, Joel Osteen responded with “Absolutely, anybody is.”

Joel Osteen, a Christian pastor, is accused of:

“You say here… ‘It doesn’t matter who likes you or doesn’t like you; all that matters is that God likes you. He accepts you; He approves of you,” Zepps stated, reading from Osteen’s book. “Is that true for [certain lifestyles]?”

“Absolutely,” Osteen replied. “I believe that God’s breathed His life into every person. We’re all on a journey. Nobody’s perfect.”

I just want to gently point out that Joel Osteen didn’t say that people practicing such things make it into the Kingdom of God. He wisely states several times that God is the one who is in charge of who enters into heaven, because I’m sure Joel Osteen knows that only God knows a person’s heart. So for this pastor to get caught up in this question would be an immense waste of time and not the purpose for which he took the interview at all.

The rest of the original article goes into the doctrine of Universalism and why it is not biblical. True, it’s not biblical, but it is also not what Pastor Osteen originally said. I feel very confident that Joel Osteen is not a Universalist. He said God accepts anyone. The Bible says God is not willing that any should perish but that all would come to repentance. God will accept anybody who repents and calls on His name. Think about that. Anybody! I mean, He sent His very own Son to die for the sins of all mankind!

Here’s a good way to get a glimpse of the Father’s heart: look at His Son, Jesus. Jesus was called the friend of sinners.

Why do you think sinners loved Jesus? Because He was full of hope! And he LOVED them – he was their friend!

Who was angry at Jesus for bringing hope to people? Who called Him a heretic and blasphemous?

(I’d like to suggest you stay away from the comments at the end of the article. It hurt my heart to hear Christians saying such awful things against another believer. It made Christians look awful. Where is our Light? We need to let it shine before men!)

Yes, I follow Joel Osteen in my Facebook feed, and probably my Twitter feed too. Can I share why with you, dear readers? Because his short snippets send hope to my heart. I don’t know about you, but my heart needs a good dose of hope these days. I can barely even read the news anymore! And I have it pretty easy!  I can only imagine the millions of hearts he has a chance to impact each and every day, desiring an imprint of Jesus, the hope of glory.

So when a Christian pastor who fills my heart with hope just about every day is lambasted in an article as well as across my Facebook feed, it stirs something in my heart, friends. I understand jumping to conclusions about the article, I really do, because it seems to be written in such a way as to elicit that type of outraged response. And please know, I fully believe the people sharing the article love Jesus, live their life for Him, and just wanted to spread the word on something that concerned them. I just have a problem accepting that that article was fueled by love, joy, peace, patience, kindness, goodness, faithfulness, gentleness and self-control. But we are each given to our own conclusions.

Am I defending everything Joel Osteen has ever said? No, because I won’t defend everything anybody has ever said, besides Jesus! None of our theologies are perfect. If I hear something I don’t find to be in line with Scripture coming from Joel Osteen, I’ll think on it, I’ll pray about it, but it would take more than that for me to dismiss his entire ministry, not to mention slander him as a person. The enemy already has enough help doing that! (In fact, I feel the enemy is behind the original article.)

If I threw out his entire life’s work because of a mistake later on, then based on that, I’d have to throw out everything King Solomon wrote in the Bible too. Ya know? Because his theology changed. But I still treasure the book of Proverbs.

I said all that to say this: what I would love to see one day in my Facebook feed, after an accusation against a fellow Christian, is a loving, concerned mass of love-filled, hope-filled people saying they will band together to love and pray for this fellow Christian. And also, maybe a few stopping to fact-check. I’m happy to be a hopeful girl in this aspect, because Jesus Himself said that one day

. . .the world will know us by our love for one another.

We’re not there yet, but He said we will be one day, and His Word is Good. What a great day that will be!

P.S. I recently came across another article on Joel Osteen on this subject, and I thought I’d add it in: The Joel Osteen Most People Don’t Know. Please consider reading this well-written article.

P.P.S. Also came across this one: What’s the Problem with Joel Osteen? Another great article. <3

PAID ENDORSEMENT DISCLOSURE: In order for me to support my blogging activities, I may receive monetary compensation or other types of remuneration for my endorsement, recommendation, testimonial and/or link to any products or services from this blog.

AMAZON DISCLOSURE: The owner of this website is a participant in the Amazon Services LLC Associates Program, an affiliate advertising program designed to provide a means for sites to earn advertising fees by advertising and linking to Amazon properties including, but not limited to, amazon.com, endless.com, myhabit.com, smallparts.com, or amazonwireless.com.

This site uses Akismet to reduce spam. Learn how your comment data is processed.

For the Makeup/Skincare lovers you know – or for yourself!!