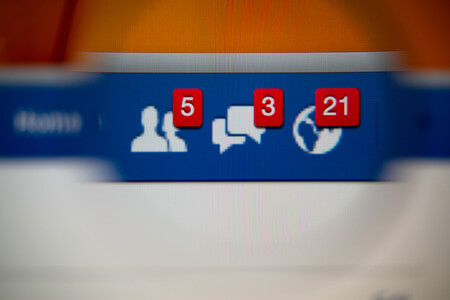 I don’t just mean the few short weeks of 2017, but I mean the past 12 months. What a crazy, historical, earth-shattering, ground-breaking… interesting… year.

On to social media. Have you noticed your anxiety level rising when you log on to Facebook? If you haven’t, I am happy for you. I have noticed it adding to my stress. The months leading up to the presidential election – I thought it couldn’t get any worse. Boy, was I wrong.

I feel very passionately about just about every subject in my life. My family, my spirituality and Christianity, my politics, health and wellness. You name it, I probably have a very strong opinion on it. Me = opinionated.

I keep my opinions quiet on my personal and my professional facebook pages however. I’m not a person who constantly comments or shares opinionated articles, although admittedly, I used to do more of that. There’s absolutely nothing wrong with doing those things, but that’s just not how I am on Facebook. I ‘like’ and ‘react’ when something moves me, but that’s about it.

In spite of my low-key behavior in the past few months, Facebook has just been a problem for me. Not just with opinions and reactions, and being “un-friended”, but with the time-sucking, life-sucking algorithms they seem to keep coming up with to draw you in, scrolling and scrolling and scrolling. I guess I am one of those people who naturally easily become sucked into the online world. I have found that I could scroll Facebook for hours if I had the time – just being honest here. I don’t like to get sucked in, I don’t like the way it makes my eyes feel, and my emotions, and I’m just now learning to take steps to avoid all this.

So what’s a girl to do with the turmoil in today’s social media-driven world? Throw out the baby with the bathwater? That would be hard for me to do, since I have two separate jobs that revolve around social media (a church social media manager for one!) and also because I truly value keeping in touch with many people dear to me on Facebook.

I have realized within the past month that I have to take measures to ensure my sanity when it comes to Facebook. Here’s how I survive the FB these days, and here are some tips I encourage you to try if you don’t drop it entirely.

I deleted the apps off my iPhone and iPad.

That was probably the hardest one for me. Once I took the app off my phone, I found myself staring at the phone when I was in moments of boredom going… “What do I do with this thing?” haha. That might sound silly but Facebook was my go-to when I was bored or waiting or needing to check out mentally. Too accessible on my phone.

I left it on my iPad for a while, but then realized I was just going to my iPad for everything. The addiction is strong in this one, my friends! I finally deleted the iPad app too.

Even though this was the hardest step, it has been the most beneficial thing I have done in regards to Facebook. When I would worry slightly about “missing out” what’s the latest conversation on FB, I would think of the several friends I have who “just don’t do social media that much” and they survive. 😉 Breaking habits is a hard thing to do but most of the time, so worth it.

I closed my ‘Ticker’ from the right side of the page.

Since I do have to access Facebook for my blog and for my part-time social media manager job, I was spending time on Facebook on my Macbook most days of the week. I have had to also take measures to manage Facebook on the computer. One of the things I did was to remove the Ticker from the right side of the site. If you go to the settings icon at the bottom of the Ticker, you can click on it and turn off the Ticker.

I really don’t care in the least who liked what or who commented on who’s status. I hate that about Facebook. So nosey! I closed it, it just clutters things up.

I unfollowed people and pages who brought stress into my Facebook feed.

Think along a minimalist note. There was too much clutter in my Facebook feed. Just like too much clutter stresses us subconsciously in our homes and places of work, it was affecting me on my feed as well. (I also have started unsubscribing to email lists that clutter up my mailbox. It has been nice!!)

I did not sever any friendships, even on facebook. I simply clicked unfollow. Some people show things that are hard for my eyes to look at and read. Not everything was about heated subjects, like politics. Some were just vulgar posts that don’t do me any good to look at and I don’t want filling my mind. Some were just subjects I didn’t care enough about to be following, or I used to be into those things but am not anymore. Unfollow! Unlike!

I chose to Unfollow people rather than unfriending. However, you can unfriend anyone you want. Just be prepared that they will probably eventually find out, and weigh whether that matters to you or not. It might not at all.

I gave myself a time limit.

Like I mentioned, I think I am one of those people who has to watch out for too much time spent with technology. I love technology. I think it’s an amazing tool. I mean, imagine you traveled a couple hundred years back in time with your smartphone and tried to explain to someone what all it can do. It’s pretty incredible – but it does come with some drawbacks, such as being addictive for many people.

Like this person here. So I simply give myself about 10-20 minutes to catch up on news, friends, and pages I want to follow. Then I get moving on to other things I need to be doing. This has helped me so much! You don’t have to give yourself a time limit, you might not have such a propensity to get sucked in to Facebook. But if you do, try it!

Because of the time limit, I clicked ‘See First’ for the pages I wanted to see.

This is a feature that I really appreciate from Facebook, the “See First” feature. If there are specific people or pages whose updates you don’t want to miss, you can go to their page and click “See First.” Then when you log on to FB, those people and pages will come up first. Really helpful when you have limited time on Facebook!

Also, I clicked to be notified when there are new or important posts in groups that I want to keep up with. Facebook is not all about the news feed, as you know. Company reps have important meetings and discussions in groups, there are prayer groups, health groups, all kinds of groups that are important to me. I even run some of these groups. And I want to be notified of certain activity, so I tailored each group to alert me in the notifications area. Then I can check the groups as needed.

Beware of the Comments Section

Sometimes people are just nuts… and almost every comments section has an argument break out between commenters. It’s ridiculous. It can be entertaining and even enticing to watch people go after each other in the comments section, especially if you agree with one of the commenters, but it’s seriously a time-waster. There’s hardly any real resolution. I learned this after getting involved in the “discussion” (argument) section a few too many times and looked back on the energy, emotion, and time I wasted changing NO ONE’s mind. lol.

Be the good. Be the change you want to see.

Some of my Facebook friends have deactivated their accounts and left for good. It’s tempting to me sometimes, and I completely understand where these friends are coming from. I can’t deactivate my account really for work reasons, and I’m not convinced at this point that I would want to anyway.

Is it too naive and idealistic to think we could change the negative tides?

Some of my Facebook friends have been more proactive, aiming to break up the turmoil with happy, uplifting posts. I like that. Why not fight the negativity with positivity? I hope to do this more with the time I have on Facebook and if you’re game, I encourage you to share uplifting things too. Make the Facebook realm a better place!

Maybe we can make it more of our aim to be a place of light in so much darkness. Whatever you feel about a topic, going around being angry really never did much to change someone’s opinion. If anything, it makes them more steadfast in their beliefs, and makes them avoid you.

Let’s honor people, even if they don’t honor us, even if they believe we are wrong, even if we believe they are wrong. Throughout all this, I learned to honor people’s opinions more – and even if I 100% believe they are wrong, I had to realize that there are subjects I am also uninformed on. We all have scales on our eyes to some extent, no matter the subject. I started praying for others, not in a condescending, superior way, but in a genuine way for their eyes to be opened to greater revelation and MINE TOO! None of us have the whole revelation on a subject and we all need to be open to the possibility of things not being what we think.

If you do feel led to educate people on your beliefs and share where you are coming from, I highly respect that and encourage you to keep doing it! We are entitled to our opinions and as of this point, can still express them (mostly) on Facebook. I encourage you, though, to be prepared for dissent, and realize that the time involved to make your case is sometimes not a great investment. At least it wasn’t for me – maybe I’m just not that persuasive. 😉 Maybe you have the gift for spreading truth. Go for it! Be loving, too. 😉

My Facebook usage has drastically changed over the past month or two. It’s something I have HAD to do to keep my sanity. Maybe I’m one of those empaths I hear about who take on the emotions and energy of those around them. I don’t know. I’m happy with the changes I’ve made, and if I need to make more, I’m ready to do that too. Do you have any suggestions on how to survive Facebook in 2017? Let us all know in the comments. I specifically titled this “…in 2017” because my hope is that by next year we will have grown up and learned to get along and this article will no longer be relevant. Hey, a girl can hope, can’t she? 🙂

I hope these suggestions can help make Facebook a more bearable place to be for you, if it’s stressing you some. As of this point, I have high hopes for positive change. Want to be that change with me? Let’s do it!