Our First Week on the GAPS Intro Diet

I never thought I’d be so happy to tell you – we survived.

We survived our first week on the GAPS intro diet.

If you’ll remember, the GAPS diet is a healing diet for those with gut issues – helping anything from food allergies to IBS to even autism. In our case, it was severe food allergies and eczema in my four young children.

I decided to go ahead and start the diet last week – it was just time. I had been putting it off for over a year. . . Actually I was always too scared to even think about trying.

I’m not sure what happened, but there we were last week, starting the GAPS diet.

This diet has two main phases – Intro and Full GAPS. The Intro phase is divided into 6 stages, with the first stage being the most limiting, and gradually adding in foods with each stage until you are ready to enter Full GAPS.

Prepared to be Underprepared

Before starting, I tried to learn as much as I could about the diet. I read the book (Gut and Psychology Syndrome by Dr. Natasha Campbell-McBride). Compiled a list of what foods to buy and have on hand, as well as supplements. I even had to special order some items online and have them shipped to our house.

I perused the Pinterest boards on GAPS recipes, how to prepare, and success stories. (Those are always encouraging.) I had planned to start a little binder filled with recipes off the interwebs just for this event, but never got around to doing that. It would have helped.

I explained to the children several weeks in advance, that we were going to be starting a Special Diet – and that meant we wouldn’t be able to eat certain things for a while, but that it was going to heal all of our tummies so that we would be able to eat more things in the end. The kids seemed to understand, and my oldest son seemed especially ready to get started. I tried to get across that it would take a long time and it would be very hard to not have the things we were used to, but that it would all be worth it in the end.

I made out a meal plan for our first five days – dedicated tentatively to Stage 1. I say tentatively because the diet differs from person to person. Some people can run through the Intro Diet in a month, some it takes several months or even a year. But I planned for 5 days for the first stage.

Let me just say – any and every thing I could have possibly done to prepare me, I should have done. I read online about just how difficult this diet is, due to the withdrawal from grains and sugars (other than honey and sweet veggies), and the detoxing our bodies were going to be doing as pathogens would be killed off in large numbers.

I knew it was going to be hard, and I still felt like I had been hit by a train.

The diet starts off immediately challenging. Our bodies were (are) used to sugar. Lots of it. We eat lots of breads, muffins, pancakes, etc. etc. We also consume lots of sugar, although I’ve only bought unrefined sugar for the past year. Still, it’s a lot of carbs. But here we were, our bodies used to eating pancakes – and here I am, serving butternut squash pureed into a soup.

It tasted fine, but even after we were full, we still felt hungry. The yeast in our bodies were starving for carbs and we were feeling the effects.

We realized we had to eat at least four times a day to try and stay satiated. The kids became whiny and wouldn’t eat. Normally I will try my darnedest not to give in to whining, but I pulled out all I had to cajole them into eating. If they ate, they could watch a movie, buy a new movie, play Xbox, iPad, trampoline, Legos. . . whatever it took to get them to eat.

Boy, it was a battle.

We were all cranky. But we survived our first day.

In the middle of the night, our second oldest son threw up in his bed. I was puzzled by that. Already? Then the next morning, our third son threw up right at the end of his meal. We had to hold him in our laps and spoon feed him micro-bites to get anything into him. Then at lunch (first lunch, that is) our second son threw up again.

This was hard. I can’t stress it enough.

But we kept on chugging. We couldn’t stop now!

Some foods were an instant hit – onions simmered in broth, eaten sliced in half. Meatballs filled with veggies, and stuffed bell peppers, filled with ground meat and veggies.

Some foods were so difficult – pureed squash soup was the least liked.

We finished our five days of Stage 1 and I ran back to the grocery store, preparing for us to start Stage 2.

Then I realized that part of the protocol involved introducing egg yolks into their soup. Sigh. Eggs have always been the WORST offender (scary worst) when it came to allergic reactions. And it was already time to introduce?

I balked. But still, I bought some free range eggs from the store. 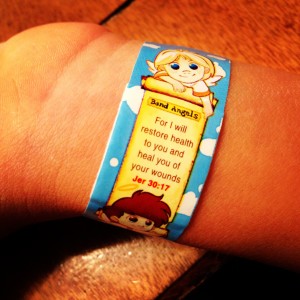 We administered the Sensitivity Test. That’s where, right before bedtime, you add a drop of the food in question to your patient’s wrist, let it dry, and let them go to sleep. If they awake to an angry, itchy red spot in the morning, you know they are not ready for that food to be introduced.

You’re supposed to do it at night, like I mentioned, but I was too chicken. I waited till the morning and gave it to all the children. I was shaking as I covered their wrists with a bandaid. Then I realized the box of bandaids I grabbed had Bible verses printed on them. Check out the verse.

God met me, a paranoid-acting mama, right where I was. He reassured me of His heart for us. He always takes care of us.

Guess what? Nobody reacted on their wrists. Huh? Seriously?

So finally I was brave enough to try the Sensitivity Test. Again. Only this time, at night. Again, no reaction.

Is this for real? Does this mean it’s time to introduce eggs – regarded as a lethal weapon in our home?

I was completely chicken. Then I was reminded by my wise husband that THAT WAS THE POINT OF THE DIET – to heal allergies. So he, the brave one (how is it daddies can do things like that??) placed a drop of egg yolk in their mouths and we watched fervently for any reactions.

Well, it was lunch time. Soup. Time to add the yolk to the soup. I separated the yolk from the white and Daddy gave each child about 1/2 teaspoon in their cooled soups.

They ate, without a problem.

THEY ATE WITHOUT A PROBLEM!!!!!

Y’all, I don’t know how to put it into words. It was the scariest and most exhilarating meal I’ve ever had to sit through. Don’t get me wrong. It was torture!!! But there they were, eating eggs, something they weren’t able to do only a week before.

It’s like a miracle to me. I’m still in shock.

Today was the second day we gave them their yolks and we increased the amount by a small bit. Again, no reaction.

I crumpled my face into my palms and bawled. . . I’ve been crying out to God for six years for my children to be healed and today He reminded me that HE CAN DO ANYTHING!!! Oh, friends, I’ve never experienced anything like this! My kids can eat egg yolks!!!

You know what my son told me tonight, right before bed?

“Mama, you know what my favorite thing is?”

We both had big, goofy grins on our faces.

We still have more steps, more foods to try, but my hope is soaring right now.

I’m not afraid to hope anymore. Bring it.

Read on for Week 2 on the GAPS Intro Diet

28 thoughts on “Our First Week on the GAPS Intro Diet”